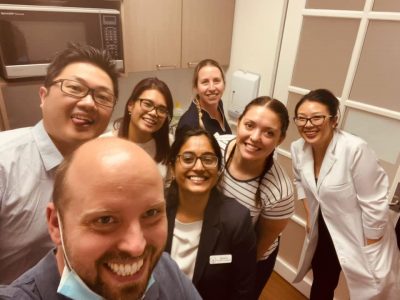 The upcoming health and wellbeing hub in Midland was an opportunity for the Centre for Prosthodontics to extend our expertise in prosthodontic patient care to the eastern suburbs. It was an exciting moment for all as the Midland specialist centre was recently completed; housing state of the art specialist medical and surgical facilities, consulting rooms, and even a café! Doctor Hezel Cohen leads the team in the patients’ prosthodontic journey in Midland which successfully saw its first patient in April 2021.

Drawing to the end of the year, our team welcomed the return of the esteemed prosthodontist – Dr Adam Hamilton. In 2016, Dr Adam Hamilton took sabbatical as he was the recipient of the International Team of Implantology (ITI) scholarship, through which he completed a Fellowship in Oral and Maxillofacial Surgery at University of Florida’s Centre for Implant Dentistry. The return of Dr Adam Hamilton will build on the expertise of our prosthodontists as he draws on his experience at the Harvard School of Dental Medicine in Boston, where he became the Director of the Division of Regenerative Sciences and Implant Dentistry and an Assistant Professor in the Department of Restorative Dentistry and Biomaterial Sciences.

With such a strong finish in these uncertain times, the team at the Centre for Prosthodontics hopes that future years in our two new locations will bring many favourable outcomes in the prosthodontic care of all our patients and future patients.